Day 25 in The Beat Handbook: 100 Days of Kerouactions is titled, "On Hitchhiking," and references the below passage from On The Road. 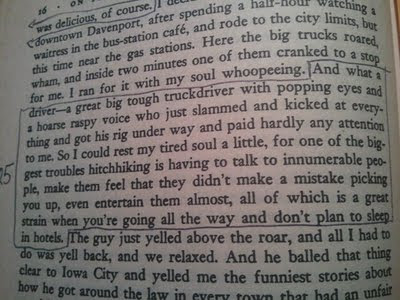 Looks like a pattern to me. That's because hitchhiking was a big part of Jack's journeys, so it has to play a central role in any Kerouac-obsessed writing. In addition, hitchhiking has a certain mystique about it that's easy to have an affinity for if you're interested, like Jack was, in the "mad ones...."

Here's some info for you if you plan to head out across America: Legendary Rob's Hitchhiker's Guide to North America.

Posted by Rick Dale, author of The Beat Handbook at 5:00 AM

I remember doing my share of hitchhiking back in the 70s. Met some pretty interesting people and a few creepy interactions. I'd also pick up hitchhikers. One of the cars I drove back then was a Toyota Tiara, standard shift, and the shift handle had broken off. So I carried a pipe around with me to put on over the stub in order to shift it and always figured it could be used as a weapon if necessary. Never needed it.

I bet that wasn't the only pipe you were carrying around with you!